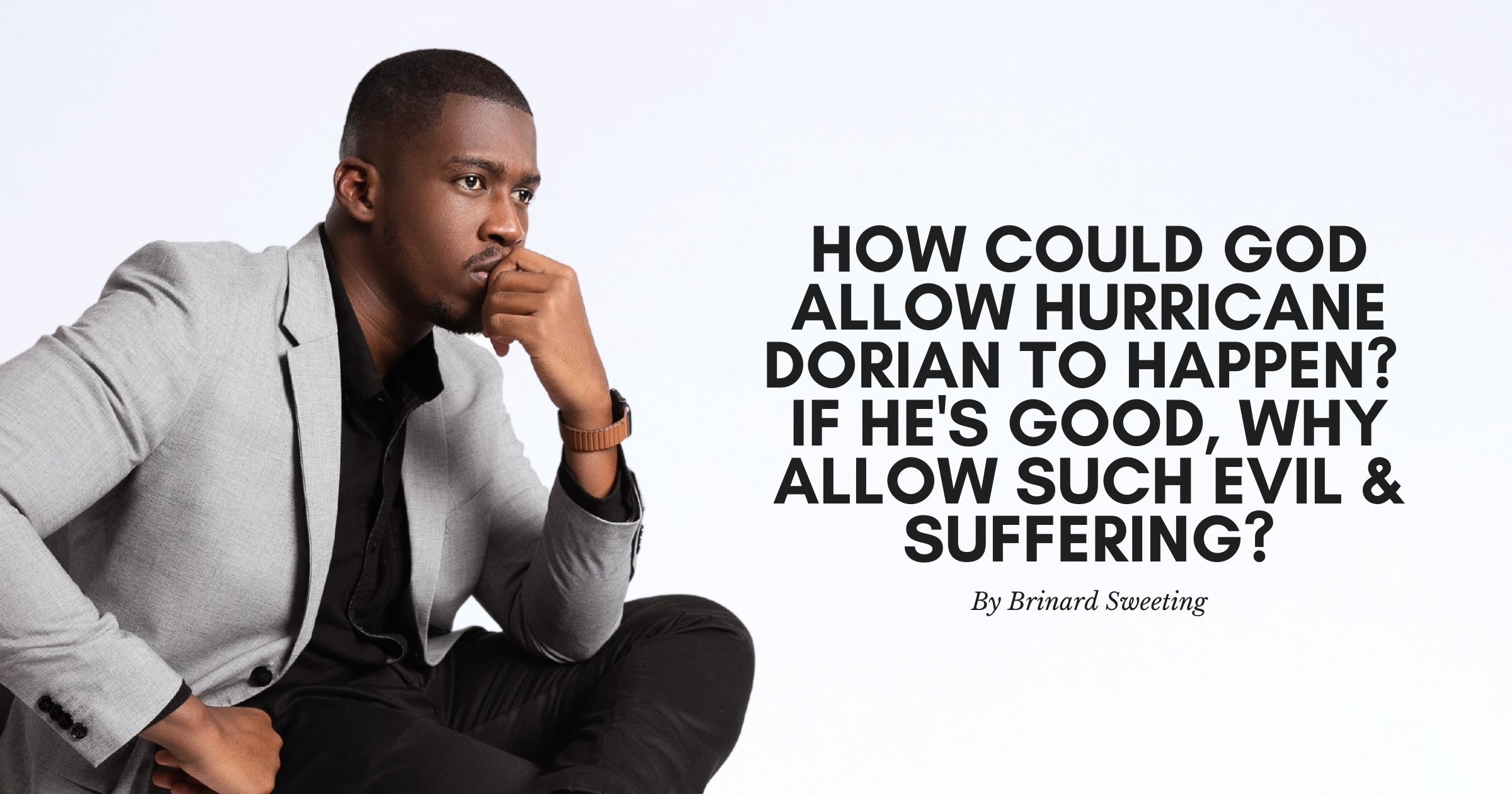 How Could God Allow Hurricane Dorian to Happen? If He’s Good, Why Allow Such Evil and Suffering?

I read a fantastic article today on the Dorian and Beyond project’s website titled “How Does God Decide?”, and I had to give an unsolicited addendum or response to that article that articulately sums up what a lot of Bahamians, particularly Grand Bahamians and Abaconians felt concerning what happened with Hurricane Dorian. Specifically the article spoke to, if God is real, then how could he allow such suffering as this––loved ones, Bahamian brethren, to die so violently and with so much destruction in its wake without an explanation or justified cause as to why? I think this is a question that so many of us have been stuck with for so long and the answers just haven’t been satisfactory. We either cover them up with “let’s just move on and continue to progress” and sometimes we just don’t think about it, but there are still those that live within the tension of “well I’ve lost loves [literally hundreds of people who were carried out to sea, never to be seen from again and died violently], how does a good God allow this to happen?”. I think that there are two categories of response to this that certainly cannot do the entire subject justice, but maybe can help point people towards different paths towards an answer. They fall into two categories, a philosophical response and more of a compassionate and pastoral response.

I think when we’re examining if God is good when he allows something like this to happen, first we have to establish if God of the Bible actually exists. And if we can follow the evidence for Christianity and the hypothesis that he does, then how can we now correlate the goodness of God with such suffering? I’m talking about frequent destructive storms, not even just Hurricane Dorian. Philosophically, this is something that my professor, Dr. Frank Turek helped me to understand, if we’re asking the question, “if God, why evil?” or “if God, why suffering?”, if God was to start intervening in mankind every time an evil was committed, an injustice was done or suffering happened, but specifically focusing on evil––maybe he would start with me. Maybe he would start with you. I think that’s something to consider because if there is an intrinsic, objective moral code that we’re all supposed to live by that’s embedded on our hearts, then we err on that every day in some way, form or fashion, whether big or small. So if we want God to pop in and out of humanity and stop evil, he would probably start with me. He may even start with you. J.M.L. Monsabre, a Pastor from the 1800s profoundly said:

“If God would concede me His omnipotence for 24 hours, you would see how many changes I would make in the world. But if He gave me His wisdom too, I would leave things as they are.”

I think sometimes we think about how powerful the God of the Bible is, but sometimes we forget in him being all powerful, there’s also an all wise part to him as well.

For the pain of losing family, friends, loved ones, homes, business, property––you name it––so violently and destructively to Hurricane Dorian, literally, sweeping people out of their homes into the sea with some never to be seen or heard from again––that hurts, a lot. Just the thought of it is immobilizing.

Who’s responsible? Who can we condemn to pay a penalty for this happening? Because it hurts. And many of us still live with that pain to this day. And those are valid emotions and valid feelings that I myself feel to this very day, even having been one who actually stood here as this happened all around me. But I think even within that, we can ask ourselves this question: for the injustices of the violent deaths, that were unexplained and unwarranted for our loved ones––who is going to pay the price? These are injustices that demand a hearing and a hearing that demands a verdict.

I also think the question for the Christian believer, the Inquirer or the seeker for answers to this issue have to ask themselves: “if I follow the evidence where it leads me and I get an objective, intellectually satisfying response, but it’s emotionally discomforting––is God still good?”. I personally think he is. And that leaves us in the tension between our head (what we logically and reasonably think) and our heart (what we emotionally feel). Can we live within that tension?

The article was absolutely brilliant and tugged at my heart for pressing answers to long-pondered thoughts, and also sums up how so many of us are feeling.