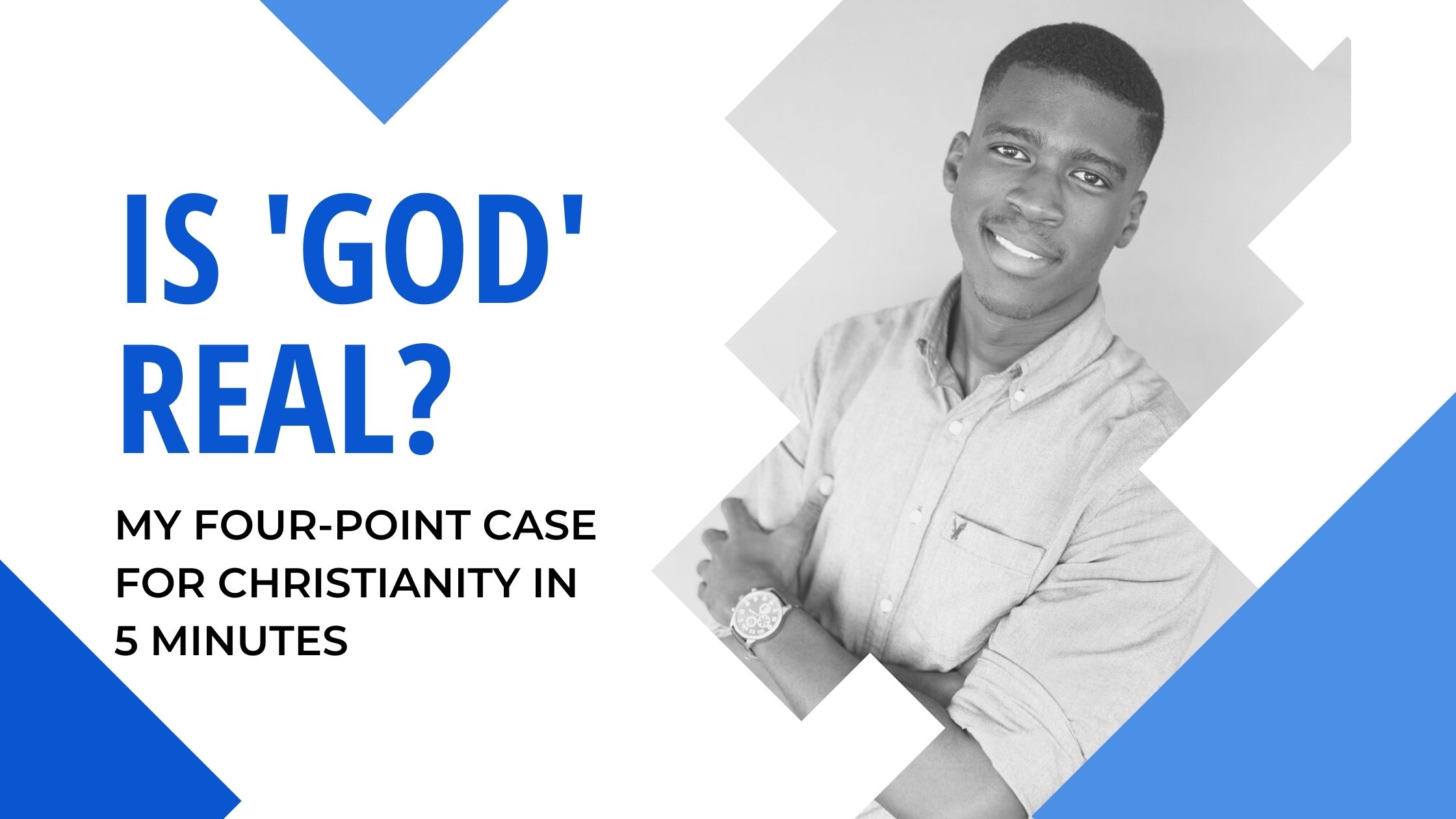 Is God Real? My 5 Minute Four-Point Case for Christianity

I’m a Christian, in 2020, still championing the faith in the midst of a global pandemic. I have a number of colleagues, friends and acquaintances, whom I love and care for, some who are skeptics and critics of Christianity, and others who fall on the agnostic or atheistic worldview. In my apologetics intensive course, my professor Dr. Frank Turek previously assigned to us share our four-point case for Christianity in under five minutes amongst ourselves in the class. Summarily, if you want to prove that Christianity is real, you need to have a definitive understanding of these four major points. I thought I’d share my response in hopes it helps others reading it to see my perspective and find reason within it.

I would say that truth––absolute, objective truth––does in fact exist. We may disagree on some of the nuances in which historical events happened, but we certainly cannot deny the existence of major details. For example, right now if you and I were having a real conversation, and I said to you “there is no absolute truth, only my truth and your truth” you have the full right to ask me “is that an absolutely true statement?”, or I say “there are no absolutes” in turn you have authority to ask me “are you absolutely sure?”. The law of non-contradiction comes into play: whereas opposite ideas cannot be both true at the same time and same sense, else they become self-defeating statements. It is my belief that there is an objective standard of truth and morality external to us all that we are innately aware of that we cannot ignore because it’s written on our hearts. Meaning, the reality of a thing and our mutual ability to reason logically, will always answer or trump relative and subjective assertions.

Now the evidence for the existence of God––the God of the Bible that is––takes us to the supporting data in the design of the universe itself. Here I refer to Thomas Aquinas cosmological argument for the existence of God. In order to create a universe that has time, space and matter, means that there has to be a creator who is intelligent, timeless, spaceless and immaterial. From a scientific worldview, The Big Bang theory states that the universe had a starting point, or an explosion of sorts that landed everything in its correct order, with specific attributes, intrinsic and personal details because of its intelligent design and the overall fine tuning of the universe.

So the intelligence of design had to come from an intelligent designer.

But that argument only gets us to a deistic god, where God exists but doesn’t intervene in the universe, let alone our lives. What gets us to a theistic God, more specifically the God of The Bible, is the fact that he’s known to be evidently personable; loving and caring for his children and intimately involved in their affairs (Jeremiah 24:11). In order to “choose” to actually create the universe in the first place, he had to have had a mind, emotions, and will to make choices––necessary elements needed for a personality.

Likewise, Miracles that occurred in The Bible are true and possible because if God is indeed real, and the supporting evidence for him is conclusively truthful, then we can reason that the ability to demonstrate miraculous signs that are imbued with his power also become possible. We have definitive and sufficient evidence that miracles are possible, because the first miracle already happened, which is the “big bang”––the creation of something (the universe) from nothing (Genesis 1:1-3).

This takes me to my last point, that we saw a number of these miracles happen in the New Testament by Jesus the Christ (God in the flesh) himself. If we agree that based on the points and evidence presented, and again, if God is indeed real, created the universe etc. then we have two evidential claims for New Testament infallibility:

So, that’s my four-point case for Christianity. I hope it makes sense to you. This breakdown doesn’t cover topics such as Evil, Suffering and Science, those I will talk to in another post.