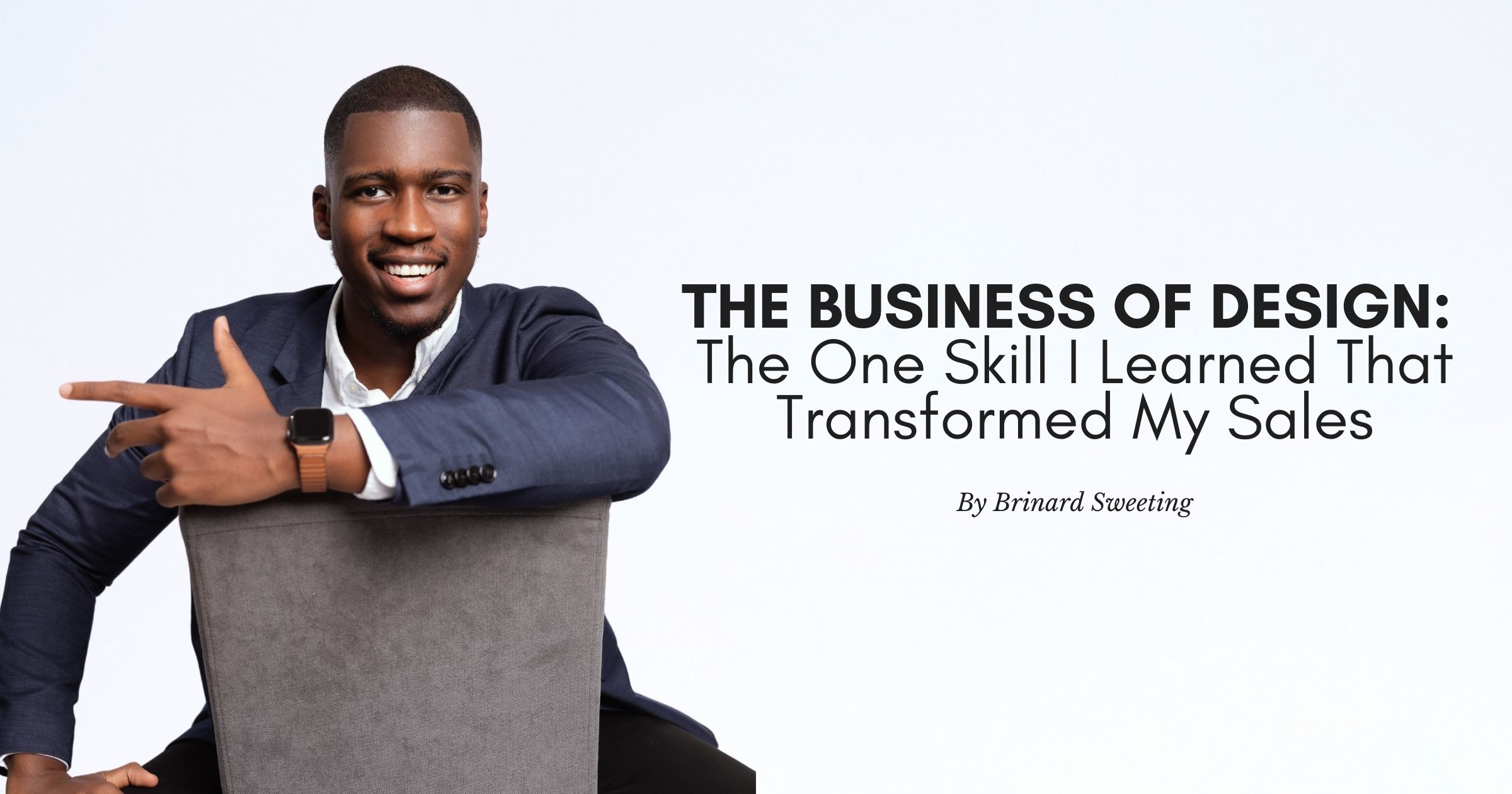 The Business of Design: The One Skill I Learned That Transformed My Sales

Most people know me professionally from running my website design & digital marketing agency, Visionary Pro Digital. I started it full-time in June 2017 and I’d like to share a few things I’ve learned specifically about business and people since then.

It wasn’t easy to take a $12,500 grant in 2017 and turn it into a six-figure a year, award-winning and respected agency anywhere, let alone in my hometown, Grand Bahama, and managed to maintain that growth year-over-year, pre-and-post Hurricane Dorian and pre-and-post (or concurrent) pandemic. I owe most of my success to God, who in my personal walk with him, favors me in everything I do, and the rest I owe to what I’ve learned on-the-fly about business. Through sheer hits and misses, highs and lows, smart decisions and bad mistakes etc, I’ve realized that in business, you’re really just playing on the emotions of people. Whether that be a possible client or customer, or someone who will see your website or digital ad, it’s really just about learning how to press the right buttons in a specific sequence, to elicit an emotional response to get the outcome you want.

Case and point: I titled this blog post the Business of Design because most people who come to my agency looking for a website (initially) already have in mind what they think they need. At first, I gave them just that––a website designed for their business that they liked and made them happy. But as time went on, I began to realize through mentorship, community and live client interactions that doing things that way wasn’t the best method. Firstly, it positioned me as an order taker and not an expert or consultant who’s a leader in my field. Secondly, pumping out work that only pleased the client based on what they said they believed the problem was, wasn’t yielding them fruitful results either, just pretty designs.

People love to talk about themselves

This shift in my thought pattern and approach to business caused a shift in my approach to conversations in my personal life as well. Here’s the secret––people love to talk about themselves and love it even more when they know you’re listening attentively. The more I got my clients talking about themselves and their businesses by asking a series of standard yet deeply inquisitive questions, it allowed me to take control of the direction of the engagement in my favor. This methodology was majorly due in part to my coaching from Agency Mavericks (then WP Elevation) and mimicking Chris Do’s approaches to clients; you treat each client as if they are a patient coming into the hospital and triage them.

At the point where someone was asking for a new website means there was already a problem they needed to solve. But what I didn’t know early on was, it was less about a design problem and more about a business problem that they didn’t know how to fix and needed help. Now the challenge is people don’t necessarily want to divulge the inefficiencies of their operation on the first call or email, but remember, people love to talk about themselves. When I got them really talking, I learned everything I needed to know, and knew how to solve their problem, but most importantly, how much to charge them.

The question everyone asks themselves: “What is my risk?”

You see, the difference between a $500 website and a $5000 website, isn’t the content or tools you used to make it, it’s the question the client is asking themselves “are they [Brinard] the least risky option?”. You see, once you build trust by emotionally connecting with someone on a level others haven’t, the walls come down in their mind and heart, and when they receive your $5,000 invoice and the other 2 guys they talked to sent a $500 and $850 invoice, they remember how I made them feel. They felt that they were in the hands of a consummate professional.

Here’s the thing, people will eventually forget how much they paid for something, they may even forget what you said, but they’ll always remember how you made them feel. In business and my personal life, when I began applying this methodology, I saw greater success in both areas.

In my earlier days as a freelancer, I approached potential clients based on their old and outdated websites and how I had a solution to update it and make them look better. There was this one client who I was well positioned to do this for, but just wasn’t biting. They were very nice about it, but I remember after the first two meetings asking myself “why isn’t this working? I’m sure he sees the problem and I have the solution and it would take no time at all”. They had the money, so that wasn’t it. Then I went out and did some more research on their competitors (that were former employees) and found out they were significantly outperforming this potential client’s website in terms of traffic largely because they weren’t anywhere on the first 5 pages of Google due to their outdated website amongst other things.

In the third meeting, boldly presenting this new information played on the client’s emotions, which was driving their ability to accept my proposal. They couldn’t allow someone who used to work for them, left and created their own company doing the same thing to win. Even if they could just beat them on this front, they had to get the win. And so that became my first and largest check for a website (at that time)––$5,000. All whilst still working a full-time job. And I’ll never forget the feeling when I got that call that not only was the proposal signed, but the check was ready for pickup!

In the design business especially, people will forget that all the visual fantasies they had in mind for their website or whatever other hang-ups they had about the process, but they never forgot how I listened intently (respect), took detailed notes and repeated their words back to them verbatim (care), and walked down the bright and aspirational path in their minds of ‘what does success look like in 12 months if we got this right?’ and sat in that feeling of achieving that goal with them (appreciation).

As humans, we love to appeal to being logical, rational and reasonable creatures, but underneath it all we’re really just big emotional teddy bears that want someone to truly take the time to show us they care about us and mean it. Now imagine if you took that same approach in your business and personal relationships.